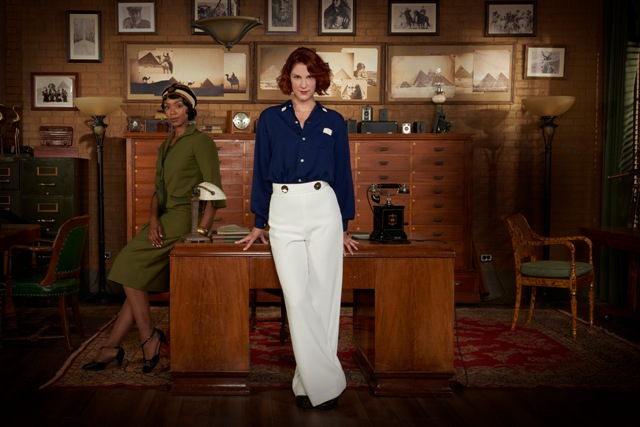 Frankie Drake Mysteries follows Toronto’s first female private detectives as they solve cases the police can’t, and other detective agencies won’t. From a movie set to an aerodrome, and a hotel suite to a Russian tearoom, the premiere season of Frankie Drake Mysteries takes viewers on a wild ride. So buckle up… The year is 1921, and the world is undergoing massive changes. In speakeasies, jazz is on the turntables as communism and prohibition are hotly debated. Society will never be the same – and crime has never had it better. A new age calls for a new kind of detective, and the women of Drake Private Detectives fit the bill.

Growing up in Toronto, Frankie Drake always longed for adventure. She found it when she spent her early twenties living abroad, and by becoming a dispatch rider when war broke out. On returning to Canada, she hung out her shingle as a private detective. Unlike Frankie, Trudy Clarke’s formative years were spent managing the responsibilities that came with being the only daughter in a family of boys. Meeting Frankie made Trudy realise that she could be more than a caretaker or shop girl.

Drake Private Detectives are great at what they do, but can’t do it all on their own. Frankie and Trudy work with a network of “freelancers” who can be counted on to lend a hand when needed. Morality Officer Mary Shaw is always thrilled to help, using her status as a cop to access police information. Morgue assistant Flo has access to death reports and a somewhat unnerving passion for anatomical gore, while Wendy Quon owner of the ladies’ local speakeasy, has all the gossip about neighbourhood goings-on. And semi-reformed con artist Nora Amory can almost always be counted on when Frankie needs a wing-woman on a case.