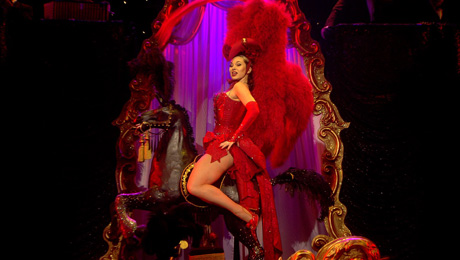 Due for theatrical release at UK cinemas nationwide in January 2010, Immodesty Blaize: Burlesque Undressed is an exclusive journey right into the heart of the art-form, featuring a compelling mix of interviews from burlesque stars past and present, unforgettable music and all-round show-stopping entertainment.

The 90-minute documentary tells the real story of the genre, charting its rise and fall from early British roots to an American evolution, and finally rejoicing in burlesque’s 21st century revival.

Filmed in HD, Immodesty Blaize: Burlesque Undressed showcases the best of burlesque in a dazzling explosion of visually stunning live performance, including footage from Immodesty’s very own sell-out Tease Show, as well as a special guest appearance from Marc Almond.

Danielle Davies, Senior VP Sales & Head of Music, DCD Rights, said: “With the genre experiencing extraordinary revival and a new Hollywood movie ‘Burlesque’ starring Christina Aguilera and Cher to launch internationally in 2010, we believe the timing is perfect to bring the ultimate documentary on the topic to our broadcasters around the world”.

“There has been a taboo around the burlesque genre in the past years but this landmark documentary brings this beautiful art to the general public in an informative and amusing way” Davies added.

DCD will launch the title at Natpe in Las Vegas in January.

First release will be in UK cinemas on January 2010 followed by DVD release on 8 February 2010.