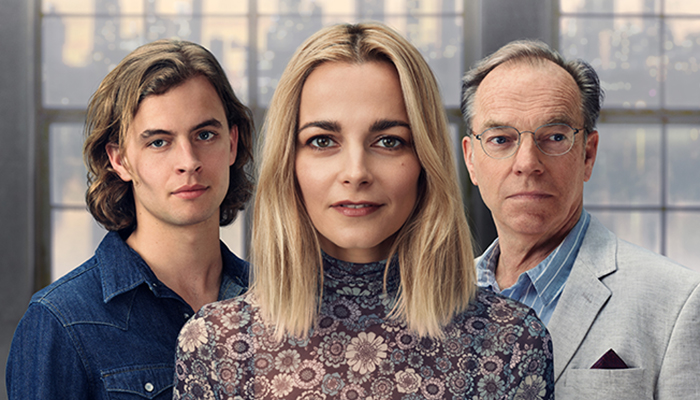 Family relationships, grief, love and new connections. The Mathiesons have it all. As Glen, his daughter Clara and son, Aaron reel from the shock death of Christine, they struggle: dealing with their hurt in different ways.

Glen is stalked by the loss of his wife, and the guilt he carries with him. Clara’s in a state of emotional ambivalence – the years of a fraught mother/daughter relationship have left damaging scars. Then there’s Aaron – he’s genuinely hurt. And unsure why the others aren’t seemingly as sad.

As the Mathiesons try to plough on, their fallibility draws them ever closer to making the really big mistakes and suffering the most hilarious humiliations. Aaron, terrified by the loss, tries to hold onto a fraught relationship, nearly missing the opportunity that’s right in front of him; Glen, released from a marriage that didn’t end in the joyous way it started, is awakened by a new way of looking at life; and Clara, facing the biggest battle, has to learn to accept love into her heart.

An authentic and intimate depiction of the place that love, loneliness, grief, and joy occupy at different stages of our lives and within our own family, Love Me is a call to the heart and a timely reminder we’re all as messy and remarkable as each other.

Hugo Weaving as GLEN MATHIESON (The Lord Of The Rings, The Matrix, Patrick Melrose)

Heather Mitchell as ANITA (Upright, The Unusual Suspects, The Secrets She Keeps)

Shalom Brune-Franklin as ELLA (The Tourist, War Of The Worlds, Line Of Duty)