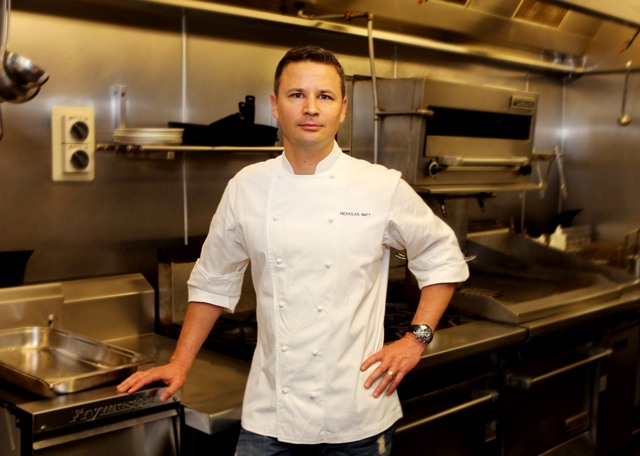 Nic Watt’s Japanese eatery Masu has won the 2014 Restaurant of the Year.

In just six months, Japanese eatery Masu by Nic Watt has outshone local competitors to be served the supreme award in the 2014 Restaurant of the Year Awards.

Watt beat competition stalwarts to receive top honours at a ceremony at Shed 10 on Queen’s Wharf last night, where Masu also took out the Best New Restaurant and Best Smart Dining categories in the Metro awards.

He told the Herald he strived to deliver exquisite food in a casual atmosphere, a concerted bid to depart from formal dining.

“I wanted to bring back a casual informal atmospheric dining scene where people come to the restaurant and have exquisite food and knowledgeable service but in an informal and relaxed atmosphere.”

“When they leave they can say they have had amazing food and amazing service but they have also had a good night with a lot of fun and laughter.”

Masu opened in Sky City’s Federal St dining precinct upon Watt’s return from offshore. He spent eight years with the Roka group, a family of robatayaki-style (where food is barbecued on skewers) restaurants in London, Hong Kong, Macau and Arizona.

Support of clientele had been overwhelming, he said.

“It’s enormous. It’s a new team and a young team and such a new restaurant so we’re pretty happy that the public is behind us and we are able to get there, it’s fantastic.”

“It’s sophisticated and yet informal,” he said.

“The food is magnificent but the atmosphere is lively. And we really love the Japanese menu.”

“These are the things Aucklanders are embracing when we go out to eat. We want to have a really good time and we want to do that without sacrificing anything in standards of food and service.”

Watt also ticked all the boxes of what judges have identified as up-and-coming trends in the local dining scene, with judges noting four new styles emerging from the city’s highest calibre establishments.

The casualisation of dining, a move toward shared plates, top Kiwi chefs from around the world and the loss of traditional meal times were all named as new dining habits.