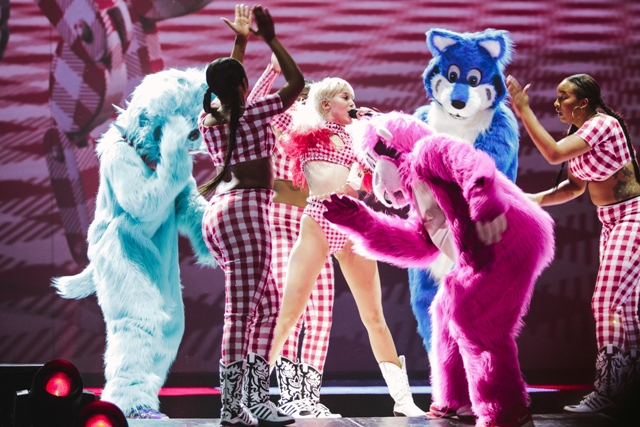 Produced by RCA Records and available as a 60’ or 90’ special, Miley Cyrus: Bangerz Tour is now heading to Globosat in Brazil and Segmento Directo in Mexico, while DirecTV has signed a pan-regional deal covering Latin American territories. Also picking up the concert are Foxtel in Australia, Hiper Vision in Israel, MTV in the UK and NRJ12 in France.

As one of the most dynamic performers of her generation, Miley’s latest concert is one big non-stop party. Featuring performances from tour stops in Barcelona and Lisbon, Miley Cyrus: Bangerz Tour sees Miley accompanied by a cast of furry friends and cartoon characters in a larger than life showcase of hits including ‘Wrecking Ball’, ‘Adore You’, ‘SMS (Bangerz)’, ‘Love Money Party’ and ‘Get It Right’, as well as party anthems ‘We Can’t Stop’ and ‘Party in the USA’.

Nicky Davies Williams, CEO at DCD Rights, commented, “Miley Cyrus: Bangerz Tour has attracted a huge amount of interest from our global clients since its launch in January and we’re delighted to announce this first line-up of deals. It’s a spectacular show featuring one of the world’s most popular and talked-about performers, offering a fantastic opportunity for channels to create a real buzz around its broadcast and engage with the hard-to-reach younger audience demographic.”