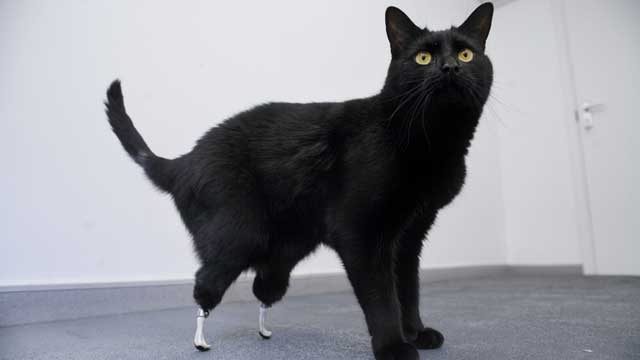 The 6-part series produced by Simon Cowell with Executive Producer Paddy Haycocks follows the remarkable work of ‘bionic vet’ Noel Fitzpatrick who is pioneering revolutionary new surgical techniques to save and improve the lives of thousands of pets from all over the country.

From his multimillion pound state of the art centre in Surrey, Noel is a unique medical engineer, rebuilding animals using a whole range of metal structures, nuts, bolts, implants and groundbreaking procedures. For many of the animals referred to him, Noel is their last hope.

From Oscar, a two-and-a-half-year-old cat who was flown to the practice from Jersey after his back feet were chopped off by a combine harvester, to eight-year-old Labrador, Mayo, who has crippling arthritis; it’s a matter of life or death for the pets.

Noel attempts a world first, to save Oscar’s life by giving him two new prosthetic paws and the chance to walk again, and comes up with an extraordinary surgical solution to save Mayo from an inevitable end. Each episode sees the veterinary use the most advanced bioengineering technologies.

The series is made by Wild Productions for BBC One and ‘filmed, produced and directed by Jim Incledon.

Nicky Davies Williams, CEO of DCD Rights said: “We are delighted to be distributing this compelling and heart-warming series that will appeal to a wide audience around the world”.