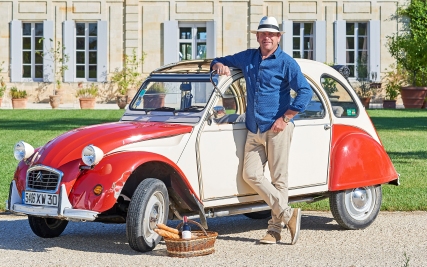 Independent UK based distributor DCD Rights has concluded a raft of early deals for its key MIPTV launch James Martin’s French Adventure, with broadcasters around the world signing the 20-episode series produced by Blue Marlin Television.

Following its recent debut on ITV in the UK, James Martin’s French Adventure, which joins the renowned TV chef as he journeys through France to the locations that inspired his culinary career and pays homage to his culinary hero Keith Floyd, has been picked up by Foxtel (Australia) and Choice TV (New Zealand) alongside a pan-Asia deal with BBC Worldwide for its BBC Lifestyle pay TV channel. In Europe, AMC Networks International – Central Europe has secured the series for Hungary, Czech Republic, Slovakia, Romania and Moldova, as well as Kuchnia+ in Poland. Dazzler Media has also acquired DVD and Digital Download rights for the UK and Eire.

Nicky Davies Williams, CEO at DCD Rights, commented, “We’ve had great interest in this brand new food travel series from our global buyers and I’m delighted to see these first deals already coming through. We’re looking forward to welcoming James to Cannes as we celebrate the international debut of this fantastic series, which offers a deliciously appealing combination of culinary inspiration, nostalgic road-trip and breath-taking landscapes.”

Holidaying and studying in France as a teenager, the country was influential in establishing James’ love for food. Hitting the open road on a journey of nostalgia, James Martin’s French Adventure follows the chef as he retraces the memorable TV trip his food hero Keith Floyd once took 30 years ago, while also visiting the places that carved his culinary beginnings. Exploring and sampling the very best in French cuisine through Provence, Perigord, Burgundy, Alsace, Pay Basque and Brittany, along the way James stops to produce his own versions of the iconic dishes he finds on location. Paying homage to Keith Floyd, James travels the length and breadth of the country in Floyd’s very own Citroen 2CV, which he owned for 16 years, as he rediscovers the food and the country closest to his and his old friend’s heart.