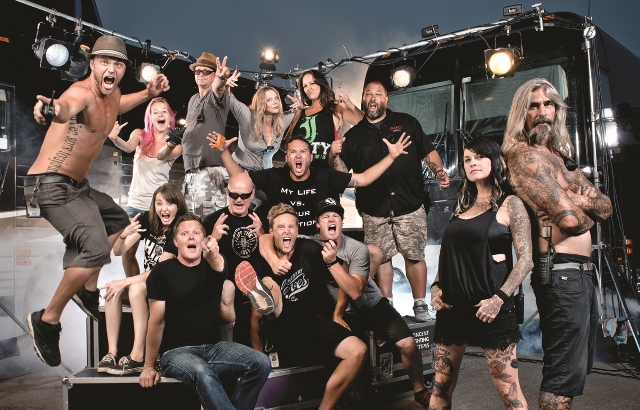 Ahead of MIP TV, distributor DCD Rights announces an output deal with Fuse, the American national cable network dedicated exclusively to music, to distribute a raft of original programming around the world. Warped Roadies is the first in an ongoing slate of original production from this innovative music themed broadcaster.

Warped Roadies (10×30’) follows the stories, trials and tribulations of the crew charged with keeping the ‘Vans Warped Tour’ rolling as it travels across the US. This series offers a unique insight and a behind-the-scenes look at what it takes to run America’s largest tour, following the unique characters and their tales from the road.

Music lovers have enjoyed their favourite bands live on stage at the Vans Warped Tour since its creation 18 years ago. And now, for the first time on television, fans will get to see the show that happens off stage. In 51 days, the roadies travel 16,000 miles to set up 41 shows for over 250 bands. They consume 82,000 meals and over 18,000 cups of coffee, all while battling rainstorms and record heat.

Fuse is an American national television network that provides a unique destination for music lovers, connecting fans with their favourite artists and delivering the most comprehensive coverage of the music industry today. Warped Roadies is a part of Fuse’s expanding original music programming lineup that includes original series such as the daily music news program, Fuse News, anchored by Alexa Chung and Matte Babel. Additionally, Fuse covers live concerts and events, and boasts comprehensive coverage of music festivals throughout America, including Lollapalooza, Bonnaroo and the Voodoo Music Experience.

Nicky Davies Williams, CEO, DCD Rights, said: “This is a unique show where the most unconventional characters achieve the most astoundingly levels of organization and skill to keep the Warped Tour safely on the road. It heralds a new collaboration with the Fuse Network whose original productions meet the broad tastes of today’s 18-34 year old audiences, and further boosts our catalogue with shows from a fresh angle. ”

Peter Tulloch, VP, MSG Media, said “We are pleased that audiences abroad will get a taste of the American music and festival scene through Warped Roadies, one of the most popular tours in America. Our newly established relationship with DCD Rights, a company that represents a wide breadth of music programming, comes at a particularly opportune time as Fuse continues to increase its output of original scripted and unscripted shows.”