DCD Rights celebrates its first 10 years in Cannes during Miptv 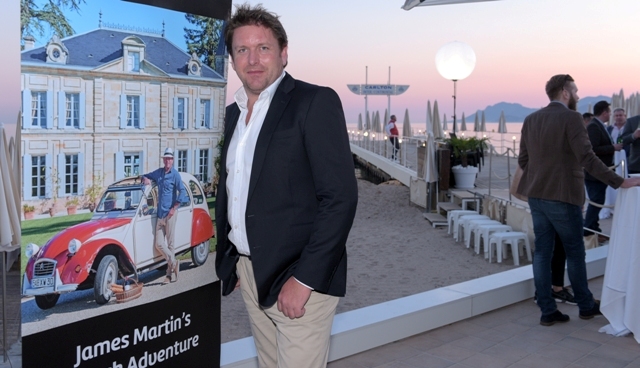 CEO Nicky Davies Williams and the DCD Rights team held a cocktail party at the prestigious Carlton Hotel Beach Restaurant and invited their clients, friends and colleagues to celebrate the first 10 years of DCD Rights at MIPTV in Cannes earlier this month.  Also in Cannes as a guest of DCD Rights was celebrity chef and television presenter James Martin who, along with members of his production team, joined in the fun.  DCD Rights distributes his brand new 20 x 60’ factual entertainment series James Martin’s French Adventure. James was on hand to talk to buyers directly about the series and encourage them to acquire the show for international audiences.

James was also guest of honour at a private dinner held at Ceneri in the hills behind Cannes’ famous Croisette.  A number of the industry’s leading acquisitions executives were invited to an intimate supper which gave them the opportunity to chat informally with James and learn more about his many adventures in France when filming the series.  It was a complete surprise when Thomas de Pariente, the Deputy Mayor for Culture and Education in Cannes, arrived at the quaint restaurant and delicatessen to thank James for creating a series which will highlight French regional cuisine to viewers around the globe.

Thomas de Pariente spoke to the diners at the start of the event, “Thank you to chef James Martin and Blue Marlin for creating such a fascinating television series which showcases French cuisine, our beautiful countryside and of course our incredible wines!  I know James has a great love of France and its regional produce.  Congratulations to DCD Rights for bringing James to MIPTV to launch his new series to international TV buyers at Cannes’ hidden venue Ceneri.”

Sandrine La Bars, chef and owner of Ceneri added, “It was an honour to host James Martin and I am very grateful to DCD Rights for giving me the chance to cook for such an amazing chef.  Like him I am a lover of good food, good products, to share and enjoy with good friends.  I also share a passion for my work and my country.   But I started my career in England and trained with some great chefs; Marco Pierre White, Gordon Ramsey and Richard Neat to name a few. On my days off I would dine at Le Gavroche with the Roux brothers. Chatting with James brought back many fond memories of my time in London all those years ago.  On behalf of my team I thank you most sincerely for entrusting us to cook for you.”

James Martin said, “It was my first time at the event and what a wonderful surprise it was too; great atmosphere, fantastic people and a real eye opener in terms of business.  It was great to be back in France, a country I love so much, celebrating the global launch of my new French series with DCD Rights.  The evening and events were a great success with even the deputy mayor turning up, which was certainly a surprise!  Dinner was cooked by Sandrine in the perfect location and a great end to a wonderful few days.”

Nicky Davies Williams concluded, “It was extremely gratifying to see so many of our old friends and our growing band of new clients from all over the world celebrate our first 10 years with the team at MIPTV.  Our dynamic programming portfolio continues to grow across many genres – drama, music, factual entertainment as well as a move deeper into co-production.  Focusing on factual entertainment we were delighted to welcome James Martin to Cannes and look forward to the next ten years of DCD Rights.”

Click here for a selection of photos from the evening.