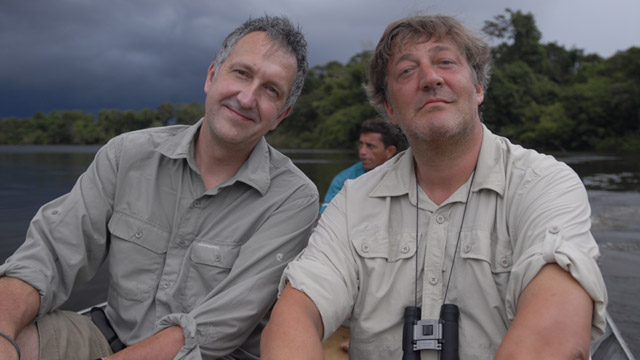 Following MIPCOM 2009, leading UK distributor DCD Rights is pleased to announce that it has sold a clutch of new top factual shows including Last Chance To See and 45 Stone Virgin to Europe, Japan and Australia.

Last Chance To See (6×60’) – Stephen Fry’s brand new series currently transmitting on BBC2 in which Fry and Mark Carwardine set out on an adventure of a lifetime to track down animals on the edge of extinction has been sold to ABC (Australia), NRK (Norway) Sky Network (New Zealand), UK TV (second window for the UK) and Madman Entertainment (Australia for DVD). The video of Carwardine’s hot encounter with a Kakapo has become a You Tube sensation, receiving more than a million hits since transmission 2 weeks ago, generating a significant online following in the UK and beyond.*

Child Frozen In Time (1x 60’) produced for TLC explores the unique case of Brooke Greenberg, who at sixteen resembles a 7 month old infant, a condition so rare that doctors simply call it Syndrome X, and believe that if they can find the cause they may discover the secret of ageing. The film has sold to documentary RTL (Netherlands), MTV3 (Finland), Nine Network (Australia), NRK (Norway), Viasat (Sweden and Denmark) and Yes DBS (Israel).

Half Ton Son produced for Channel 4 earlier this year, follows the journey of Billy Robbins – the world’s heaviest teenager as he makes the decision to turn his life around, undergoing several operations in the process and learning to be completely independent from his mother, has been picked up by RTL (Netherlands), Discovery Europe (EMEA), MTV3 (Finland), Nine Network (Australia), RTL (Belgium), RTL (Germany) SBS (Belgium), Nippon (Japan) TV Norge (Norway), TVNZ (New Zealand), Viasat (Sweden and Denmark).

Nicky Davies Williams, CEO, DCD Rights, said: “We are delighted with these deals, which reflect the strong appeal of our slate of factual entertainment and human interest documentary programming on the international marketplace”.

* Well over a million people have now watched the YouTube video of Sirocco the rare Kakapo parrot try to shag zoologist Mark Carwardine’s head as Stephen Fry looks on in ‘Last Chance to See’. The clip has been shown on MSNBC’s Rachel Maddow show, Harry Hill’s TV Burp, TV New Zealand and Australian news. Sirocco now has nearly 4,000 friends on Facebook and a few thousand followers on Twitter.