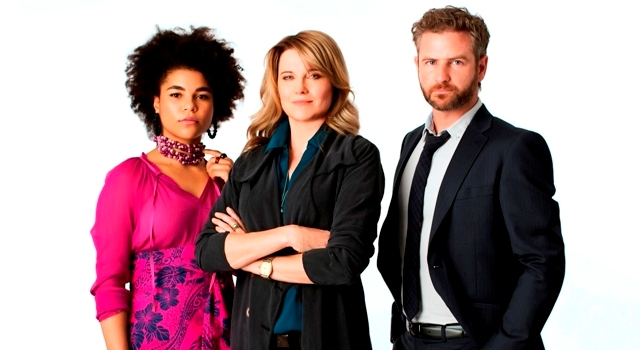 A Closer Production presented by SBS Broadcasting Australia & Screen Australia, in association with the South Australia Film Corporation, The Hunting (4 x 60’) has been picked up for Channel 5 by Acquisitions Director Anna-Belen Dunlop for the broadcaster’s prime-time schedules. The series will premiere on SBS in Australia on 1st August at 8.30pm, with the UK premiere set to follow later in the year.

A new investigative drama series, My Life Is Murder (10 x 60’), is a CJZ Production for Network Ten Australia, with major production investment from Screen Australia and Network Ten, in association with Film Victoria. The series will premiere on UK screens soon after it airs in Australia on UKTV’s crime drama channel, Alibi. DCD Rights led the sale, and the acquisition was secured for UKTV by Charlie Charalambous, Acquisitions Manager.  The ten-part series will debut on 17th July at 8.30pm on Network Ten in Australia and in September on Alibi.

Nicky Davies Williams, CEO at DCD Rights, said, “Australian drama has had somewhat of a renaissance lately and The Hunting and My Life Is Murder are prime examples of how the Australian content industry is still in its ascendency.   Both these series are perfect for prime-time schedules in the UK and we are delighted that UK viewers will have the opportunity to enjoy Australian drama at its best.”

The Hunting intimately and dramatically imagines the lives of four teenagers, their teachers and families throughout the lead up, revelation and aftermath of a nude teen photo scandal.

When two high school teachers discover students are sharing explicit photos of their underage friends and peers online, the revelation has unbearable consequences for the students and their families. Tackling themes of misogyny, privacy, sexuality and sexualisation, online exploitation, toxic masculinity and gender, the series uses this singular event as a way of exploring some of the most pressing issues of our time and offering a vital portrait of modern, multicultural Australia.

My Life Is Murder follows the complex, contrary and compelling investigator Alexa Crowe (Lucy Lawless – Xena: Warrior Princess, Ash vs Evil Dead, Top Of The Lake, Spartacus), who can’t help fighting the good fight – whether it’s solving murders or combating the small frustrations of everyday life. In each stand-alone episode, the fearless and unapologetic Alexa uses her unique skills and insights into the darker quirks of human nature to provoke, comfort and push the right buttons as she unravels the truth behind a raft of the most baffling of crimes.

As Alexa unmasks the hidden passions and dangerous secrets lurking in the energetic, ever-changing city of Melbourne she is ably assisted by ambitious twenty something Madison Feliciano (Ebony Vagulans – Doctor Doctor, The Letdown), who is not so quietly learning from the best – and her former boss, Detective Inspector Keiran Hussey (Bernard Curry – Wentworth, Faking It, Once Upon A Time), who enlists Alexa on his trickiest cases on the understanding it also means he gets to keep an eye on what she’s up to. And then there’s Alexa’s stubborn cat Captain Thunderbolt – Madison’s nemesis, Keiran’s biggest fan and the one personality Alexa will never quite crack…

And at the centre of everything, in all her unrepentant, brilliant, fearless glory, is Alexa Crowe. Ultimately this is a show about a woman who just refuses to give in. Or give up. Or shut up.